'Terra Australis' was the last landmass to be discovered by European explorers. It consists of six states and two territories, with each state and territory having its own parliament, flag and floral emblem.

The first Australians came from Asia at some time during the last Ice Age, probably 120,000 years ago. Later the seas rose, separating Tasmania & New Guinea from mainland Australia. When the sea was at its lowest level, Australia would have been about 2.5million square kilometres larger than it is now. Because the first inhabitants would have probably camped on coastal areas, the date of the first arrivals will probably never be known.

It seems probable that the first inhabitants arrived on the north coast and spread during the following centuries along the coasts and river valleys. Only the adventurous or run-aways ventured further inland. Consequently, you will find that most of the inhabitancy is around the southeast fringe of Australia.

Soil core samples taken from Lake George in New South Wales indicate that Australia's first inhabitants would have been here approximately 120,000yrs ago. Samples showed a high incidence of charcoal, indicating fires, a decrease in fire-intolerant plants, and an increase in eucalyptus pollen. Climate studies showed that the continent was no drier then than at earlier inter-glacial periods to cause such fires. However, thousands of years later the aboriginals practised the using of fire to round up animals for hunting and opening up the Australian bushland. Possibly the same practice was used on the continent for thousands of years. Indicators are the amount of fire resistant plantlife, and the many native trees & plants species that require fire to germinate. 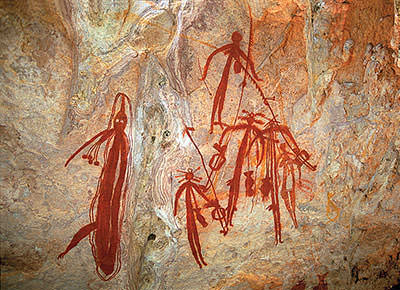 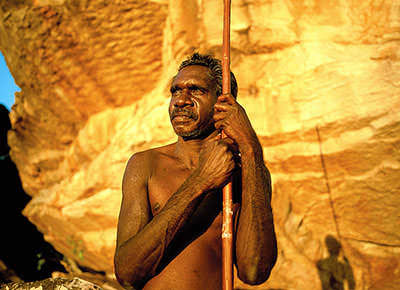 However, from his impressions of the baron North West Coast he concluded that the land was worthless. A mistake he would have probably regretted later if he knew the potential worth of this country.

James Cook later saw the continent in a different light. His first landing was at Botany Bay in 1770. After a weeks stay he turned north, charting nearly all the East Coast. He 'took' formal possession of the Eastern half of the continent in the name of King George III. Captain Arthur Phillip returned to Botany Bay 18 years later with the First Fleet to found a British settlement. He preferred Port Jackson and established the settlement of Sydney. For the next 25 years colonisation was limited to about 65 kilometre radius of Sydney, bounded in by what they thought was impassable terrain called the Blue Mountains. It wasn't until 1813 that they made their way pass this barrier and pastoralist began to open up inland Australia.

Australia endured many rough years and changes in society until on 1 January 1901 it finally became a federated nation after the union of the six colonies. It was then bound by one parliament, one constitution and one flag. The Centenary of this Federation of Australia was celebrated in 2001.

The use of Australia as a penal colony, assisted immigration and the discovery of gold had enormous effect on the populating of the continent. This was further increased by European practices of having large families. In a short time Australia boasted a sizeable population from small beginnings. Two thirds of the population increase in the 20th century has been due to natural increase (births).