Paddlesteamers are a part of Australia's romantic culture.

While an integral part of the Murray transport system, they combined the magic of outback Australia and the River itself. Paddlesteamers, houseboats and riverboats steam along this huge river, and to take a journey on one is a magical, relaxing experience much sort after by international tourists. You can experience the real Australia, or at least see how it was over 100 years ago. There are day and night cruises, dining and relaxing on the tranquil waters of the Murray.

Paddlesteamers helped to open up the way to this part of Australia. Nearly all the towns along the Murray began and continue to prosper because of the River

The Murray River System is covers around 1800 kilometres of waterways, including the Darling and Murrumbidgee Rivers and their tributaries, creating one of the longest river systems in the world.

After the east coast of Australia was colonised, the Blue Mountains presented an obstacle for further expansion westwards. Once the mountain barrier was crossed in 1813 exploration then proceeded westwards and exploration of the river system began. It was during this time it was believed that there was an inland ocean, somewhere in the middle of Australia, and that with the Lachlan, Darling, Murrumbidgee or Murray Rivers flowed into it. In 1830 Captain Charles Sturt explored the Murrumbidgee River and found it flowed into the Murray River. He explored the entire length of the Murray and established that its mouth was in the vicinity of Goolwa in South Australia. John Oxley who previously explored 2 of the major rivers in 1817, Sir Thomas Mitchell in 1836 and Captain Charles Sturt were largely responsible for opening up the South East of Australia. After Sturt and Mitchell squatters quickly followed and established communities along the River.

The River provided an ideal environment with ready access to food and water.

As settlements began to get established along the Murray, so to came the need for transport of livestock, wool and other produce. This became a major problem for these communities, as they already had to deal with the trials of isolation, floods, and summer heat. They were unable to thrive if goods didn't reach markets in reasonable times. Governments knew this was a problem to be addressed, and in 1852 Sir Henry Young, Governor of South Australia, offered a reward for the first steam boat to reach Swan Hill. The first paddle steamers sailed the Murray River in 1853 and established a thriving industry. 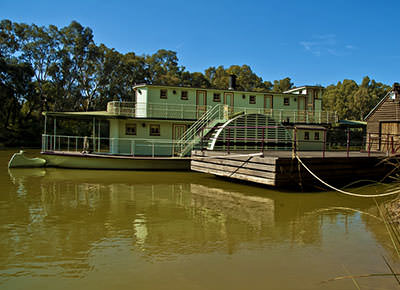 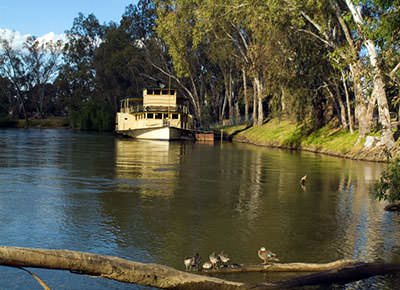 As you travel the Murray you will also be witness to another part of the River history. For thousands of years before white settlement of Australia the Aborigines lived in large numbers along the entire length of the River. The Aborigines constructed their canoes by cutting the bark off huge Red Gums and shaping and packing the ends to make them watertight, by softening the bark over fire to shape, and by the use of fibre ropes to bring the sides together. You can still see some of these huge trees near the River with a section of their bark having been removed for the making of canoes. The removal of bark only took place on one side of the tree enabling it to continue to live and grow.

The Paddlesteamers frequently needed to reload wood for fuel. Woodcutters used to stack large piles of wood along the banks of the Rivers. The paddlesteamers used to blow their distinctive whistles to let the woodcutters know which vessel to bill for the wood. There were some however, who used to cut their engines and cruise alongside the piles and take the wood, and drift silently off again. It didn't take long for the woodcutters to know when certain steamers were in the region, and they would stuff hollow logs with explosives and leave them in the pile. Several steamers suffered from unexpected explosions of their boilers.

Paddlesteamers faced many and varied perils. Floods caused fast flowing waters which made navigation difficult, particularly for the boats with lesser powered engines. Floods also caused changes in the mapping of the River, sandbars moved snags once visible were now submerged and their location unknown, and as the River height (which could sometimes extended kilometres inland) receded it left boats stranded on the banks of the River and further.

Paddlesteamers also were victims of fire because of the wood fired steam engines. Many vessels caught fire causing great losses. Often the quickest and most effective way of extinguishing a blaze was to sink the vessel, and later salvage the remains and hopefully recover its cargo.

With the development of more effective and less time consuming road and rail transport, it brought about the death of the working river boats. Many Paddlesteamer owners and Captains tried other means in which to keep the River trade alive, but one by one they were retired.

But the magic never died. Some that were retired were later refurbished and refitted and became part of what is now a thriving tourism trade.

So take the time out and become part of River Life!