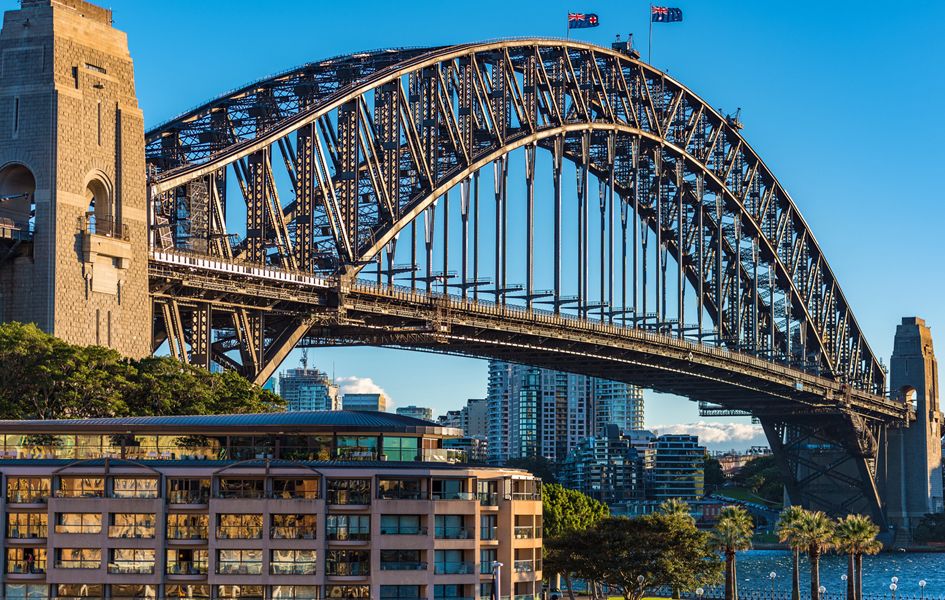 The Sydney Harbour Bridge is a steel through arch bridge across Sydney Harbour that carries rail, vehicular, bicycle, and pedestrian traffic between the Sydney central business district (CBD) and the North Shore. The bridge is nicknamed "The Coathanger" because of its arch-based design. Currently it is the sixth longest spanning-arch bridge in the world and the tallest steel arch bridge, measuring 134 m (440 ft) from top to water level. The bridge is held together by six million Australian-made hand-driven rivets.

The southern (CBD) end of the bridge is located at Dawes Point in The Rocks area, and the northern end at Milsons Point in the lower North Shore area. There are six lanes of road traffic through the main roadway, plus an additional two lanes of road traffic on its eastern side, using lanes that were formerly tram tracks. Adjacent to the road traffic, a path for pedestrian use runs along the eastern side of the bridge, whilst a dedicated path for bicycle use only runs along the western side. Between the main roadway and the western bicycle path are two lanes used for railway tracks, which service the T1 North Shore Line for Sydney Trains.

Together with the Sydney Opera House, it is an icon of Australia.

Although originally added to the bridge solely for their aesthetic value, all four pylons are now in use. The south-eastern pylon contains a museum and tourist centre, with a 360° lookout at the top providing views across the harbour and city. The south-western pylon is used by the New South Wales Roads and Traffic Authority (RTA) to support its CCTV cameras overlooking the bridge and the roads around that area. The two pylons on the north shore include venting chimneys for fumes from the Sydney Harbour Tunnel, with the base of the southern pylon containing the RMS maintenance shed for the bridge, and the base of the northern pylon containing the traffic management shed for tow trucks and safety vehicles used on the bridge.

The Sydney Harbour Bridge is a toll bridge to vehicular traffic. There is a variable tolling system for all vehicles headed into the CBD (southbound). The toll paid is dependent on the time of day the vehicle passes through the toll station which varies from $2.50 to a maximum value of $4. There is no toll for northbound traffic (however taxis travelling north may charge passengers the toll charge for their return journey).